Much of this is presented as written by Cthaeh and Me, but we joined a team, and they should be mentioned as contributing a ton before most of the group vaporized when Council won. As such, the story ended up that it was just Cthaeh and me for much of Saturday and Sunday. Props to Jonathan (sciserax) and Madman, who came back and did most of the remaining parts with us. In the end, I was the only one left to hand 1o57 the last flag – or at least, I think I was last. Maybe Jonathan also hopped across that finish line later in the evening, but I needed to catch a plane, so I never found out.

The team credits are a little sketchy due to total implosion when Council took the victory, but everyone should be mentioned. Credit where credit is due.

How this guide works – the blog post will contain only information gained by running around at the con, and the html comments will include hints, and there will be a link to the page with the full solution details and design speculations. I wanted to give a site that’s safe to read if you don’t want to be spoiled on the challenge at all, so here it is.
Later on, it gets into a string of semi-linear challenges, so each solution page
will link to another solutions page and so on.

Edit: Hoof, I didn’t realize the WordPress added such a big bunch of html to the top of it. Ah well, just scroll on past and you’ll find the bit where I’ve hid comments.

Gathered from various hotels on the Defcon Booking:Top two are from Paris and Planet Hollywood, next two are from Caesar’s Palace and the Linq (order?), and the last row are from Flamingo and Ballys.

These are gathered from standees about the con. Sorry about image quality, I’ve done my best to realign so that they’re square-ish, but that’s obviously pretty lossy. Or I just suck at gimp.

From outside the Arcade in Ballys

outside elevator to 26th floor

First, the images of the badges (backs only for non-human) – again, courtesy of the Wikia folks (sorry the arrangement looks shit. I blame WP): 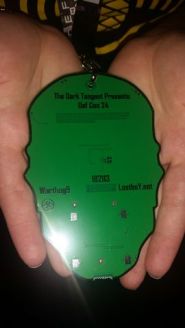 The top part of the hidden traces is common to all of the badges:

The middle part, also hidden traces, also common to all:

Finally, the silk screen is different on each. Indexed by type of badge, the full list is:

Disclaimer: due to certain inability to locate a soldering iron, I never managed to get to this myself; My team, and some folks on Wikia managed to extract these strings from the badge.

When the konami code is entered to the buttons

At various other times:

Unfortunately, I don’t have any full pictures of the set and the lovely image that they form, just the data.

There were 4 lanyards of the ordinary set; say it with me : Lock, Floppy, Jolly Roger, Rotary; good.

But, there was one more that was preferentially handed out to people new to the con and during 1o57’s opening ceremonies T-shirt gun style into the crowd. The full data, aligned as the lanyard art design would have you think:

On 1o57’s page, there are a bunch of equations. Written out in non-fancy-LaTeX typeset way, these are:

Now, we need to put together the things we’ve found.

Careful on this one. If you’re playing along, this contains all the solutions to all of the above steps. So.. you know, Red blaring klaxon spoiler alert.

One thought on “Defcon 24 Badge write-up”